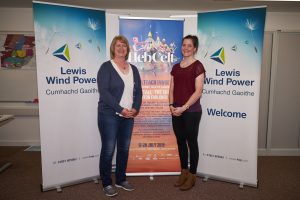 An exciting and diverse line-up has been confirmed for the Hebridean Celtic Festival’s Islands Stage which will be sponsored by Lewis Wind Power for a fifth successive year.

The multi award-winning festival will be held for the 24th time from 17-20 July in Lewis and Harris.

The ongoing partnership with Lewis Wind Power, developer of the Stornoway Wind Farm, fits with the event’s environmentally-friendly ethos for which it has won a number of awards.

The Islands Stage programme, featuring 12 acts from different parts of the UK, gets under way on Thursday 18 July with acclaimed contemporary Gaelic singer Kim Carnie, followed by six-piece traditional outfit, Beinn Lee, from Uist, who released their debut album last year and issued a new single in April.

The Benedict Morris Trio, featuring this year’s BBC Radio Scotland Young Traditional Musician of the Year, will be first on stage on Friday. Fiddle player Benedict secured a HebCelt invitation after winning a competition at this year’s Celtic Connections.

FARA, which brings together four exceptional young musicians from Orkney, are next up, followed by The Kris Drever Trio, featuring the renowned singer songwriter who has also enjoyed success as a solo artist and as part of folk band Lau.

Starting Saturday’s programme will be Jamie MacDonald & Christian Gamauf, who earned their stage slot by winning a competition for young talent organised by the festival and Lews Castle College UHI, part of the University of the Highlands and Islands, for performers who are studying, or who have studied, on one of the college’s music programmes.

They will be followed by Jake Morrell, from Norfolk, who was asked to play at Glastonbury after festival boss Emily Eavis heard him on the radio; Glasgow-based roots outfit Awkward Family Portraits; Hands Up For Trad, Battle of the Folk Bands 2018 winners Eabhal, from South Uist; and folk band Talisk who secured a Belhaven Bursary for Innovation in Scottish Music at the recent Scottish Trad Music Awards.

HebCelt Director Caroline Maclennan said: “We are extremely grateful to Lewis Wind Power for continuing their generous support for a fifth successive year. This significant ongoing partnership allows us to put together another very strong Islands Stage programme.”

Kerry MacPhee, Community Liaison, Lewis Wind Power, said: “Lewis Wind Power is delighted to continue with its sponsorship of the Islands Stage for another year, given HebCelt’s place as the islands’ flagship event.

“The Islands Stage has become a key part of HebCelt with some great bands over the years and some great new musical finds. I’m sure that this year will be no exception.

“We wish Caroline and all the team every success with this year’s festival.”

The 24th HebCelt will feature almost 30 international acts in the main arena programme – including headliners KT Tunstall, The Shires and Tide Lines- as well as events in various venues in Lewis and Harris.